Huub retired on 1 January 2020 after having worked in crop protection for 38 years. During his career, he contributed to finding practical solutions for many diseases in arable and horticultural crops. Huub also built international networks e.g. resulting in the long standing EuroBlight workshops and (IPM) training sessions all over the world.

You are cordially invited to the retirement farewell party of Huub Schepers.

If you want to join the reception then please send an e-mail to Huub about it. Huub Schepers : HTAM.Schepers@gmail.com

Huub initiated the EU.NET.ICP concerted action in 1996 and the first meeting took place in Lelystad (Photo below), the research centre where he spent most of his career. Following the EucaBlight project 2003-2006 EuroBlight was established in 2007 as a formal "Potato late blight network for Europe". Ever since then this network was coordinated and managed by Huub Schepers, Alison Lees and Jens Grønbech Hansen. The operation of the EuroBlight network has been very successful and now EuroBlight is a sister network to similar networks globally (USABlight, Tizon latino blight and AsiaBlight). 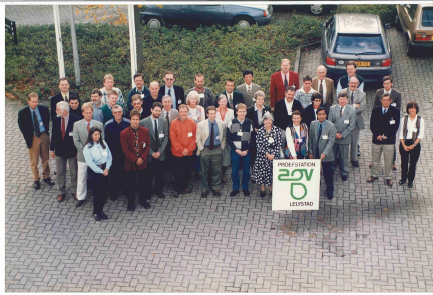 Huub always took the lead in stimulating to global collaboration, friendship and exchange of ideas. He was the one who always asked the scientists "and what does that mean for practice". He was the founder of what we all know as the EuroBligt fungicide table, he was editor of the EuroBlight proceedings and he was main person responsible for keeping the good contact with the industry partners and sponsors. He has been a most valuable ambassador for EuroBlight during his national and international projects, and we cannot thank him enough for a wonderful 25 years together.

We took the chance to ask Huub about his carreer, what were the key achievements and experiences, and what he sees as important research questions still to be dealt with.

What did you do before you came to Lelystad? Huub: "I worked as a Crop protection specialist during my studies, 1974- 1980. Then I had my PhD 1981-85, covering cucumber powdery mildew biology and management. From 1985 to 1989 I coordinated work by extension specialist in glass house crops at the extension service, and we put much attention to produce dissemination material. I was then R&D manager at Hoechst Holland, 1988-1991, taking care of trials and registration. After one year at the ministry of social affairs I finally joined the group at Lelystad, working on arable crops and vegetables in 1992."

We will always remember you as the founder of the EU.NET.ICP concerted action dealing with DSSs. In your opinion, what was the main achievements by this initiative? Huub: "Initially the idea was to make one DSS for the whole of Europe. We tested different DSS in a coordinated way, but we did not end up with one unique DSS. One important achievement was the formation of the network that evolved into first the EucaBlight project and then the EuroBlight network as it is today. We experienced the power of working together, harmonising methods and sharing of data. Getting the overview of existing DSSs, exchange of ideas and test under field conditions stimulated to further improvements of the national DSSs."

It was in 1998 the EU.NET.ICP group started what we today know as the EuroBlight fungicide table.

The network continued to meet and a new concerted action, EucaBlight, coordinated by the James Hutton Institute, started in 2003 aiming at  characterising host resistance and pathogen characteristics. Much efforts were put into the development of harmonised protocols. Breeders and several other stakeholder groups were involved, and we started to build what is now the Potato late blight toolbox (data management system) that serves the EuroBlight information platform. The EucaBlight consortium initiated the EuroBlight monitoring system, that includes strategic and coordinated sampling of isolates in the whole Europe followed by SSR genotyping in a few dedicated labs in Europe. One major objective was to overview and analyse the spread and evolution of new P. infestans populations, - also to cope with the risk of fungicide resistance.

EuroBlight was formed in 2007 as a platform and a network for a continuation, with Huub, Alison and Jens as the coordinators.

What was the driving force for EuroBlight? Huub: "There was an expressed interest to meet each other, exchange information, discuss new developments and current scientific issues, coordinate national projects and to include younger scientist in the network. It was an interesting mix of research and companies. National money became less and less and we had to work together to cover all issues re late blight epidemiology and control. We were too small in the single countries to cover everything. To cope with that, we found a good formula for the workshops combining plenum discussions and working in subgroups."

What have been the main achievements of the network so far?: Huub: Everybody now refer to the EuroBlight Fungicide Table. Also the P. infestans monitoring system and the establishment of an early blight subgroup was successful. EuroBlight also stimulated to building similar networks on other continents. They like the idea behind EuroBlight, but they organise in a different way and include their own ideas and research agendas off course. We are now a network of networks and people from the other networks always attend the EuroBlight workshops - and vica versa - to coordinate, harmonise, present and discuss the regional situation about late blight and early blight in a global context."

In the most recent years Huub has spent a lot of time on international projects and also helping the start-up of the other regional networks (Tizon Latino, AsiaBllight etc.). His wife Eva often joined the EuroBlight workshops and she became a member of the EuroBlight family. 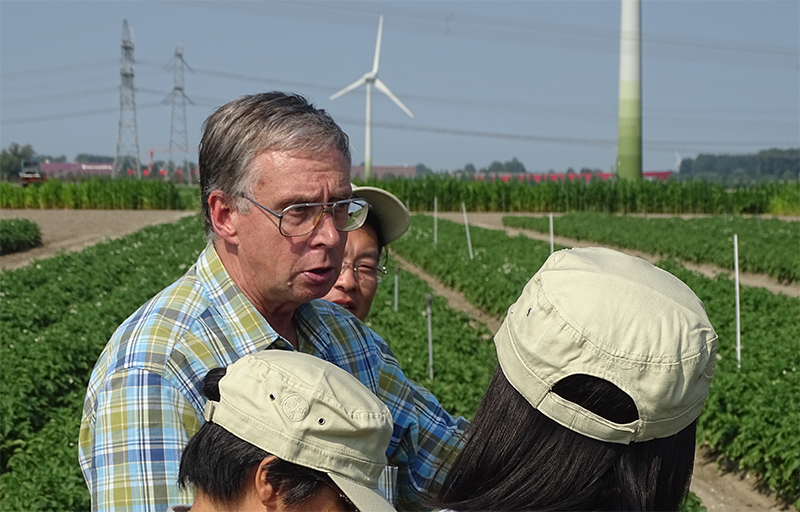 What did we learn

What is the situation about IPM in your own country and what are your recommendations for practice? Huub: "In the Netherlands we see these new genotypes developing, but nobody do research in phenotyping or basic epidemiology any more. Previously we did test new genotypes for phenotypic traits e.g. fuazinam resistance test, but we did not have money to continue. I believe more chemicals will disappear. We should try to do with less chemicals. We must put more attention on the other IPM measures, and farmers should help to minimise the impact of primary inoculum sources, shift to more resistant cultivars, include alternatives and use a DSS. Inoculum in the seed is still the primary source of inoculum in many countries. EU_36 originated from starch potatoes and EU_37 from ware potatoes in the Netherlands. Seed or volunteers is the primary source when we talk about clones. The quality of the seed should go up as a part of the sanitation measures. Companies in the Netherlands, they all ready now have shorter cycles for multiplying seeds."

Huub attended the most recent workshop in York and more than 100 people participated. Many good friends and colleagues will remember Huub and his ability to create this special EuroBlight atmosphere of friendship, openness and stimulation to collaboration and working together. Sure you will go nuts not being on the move all the time. All the best to you and Eva.