Results of the EuroBlight potato late blight monitoring in 2020

EuroBlight is continuously examining the ongoing evolution of the European population of the potato late blight pathogen and now reports on the 2020 results. Approximately 1200 samples from 28 countries genotyped.

Since its arrival in the nineteenth century, Phytophthora infestans, the cause of potato late blight, has remained a serious threat to European potato production. Although we are now better equipped to control the disease than in the past, evolving pathogen populations challenge integrated management practices. Changes in P. infestans populations directly influence the deployment of resistant cultivars, the performance of disease warning systems and the efficacy of plant protection products.

Co-ordinated and continuous pathogen monitoring was thus proposed by the EuroBlight consortium at its meeting in 2013 and has since been implemented as an EU-wide monitoring activity supported by many stakeholders. Such monitoring and characterisation of the population changes and invasive genotypes helps optimise IPM strategies, as required by EU Directive 2009/128/EC on the sustainable use of plant protection products.

FTA sampling cards onto which lesions had been pressed were returned to laboratories at the James Hutton Institute, Dundee and INRAE, Rennes for pathogen DNA fingerprinting using simple sequence repeat markers. Samples were assigned to existing clonal lineages or defined as new genotypes and all results uploaded to the EuroBlight database. Support from international groups is generating similar data for parts of Asia, South America and Africa, allowing for a more global understanding of pathogen population changes.

What did we find?

The decline in the clonal lineage EU_13_A2 (blue-13) continued in 2020 as its frequency reduced to 7.6% of the samples. However, this metalaxyl-resistant clone continues to affect management efficacy in Europe, parts of Asia and North Africa, reinforcing the need for pathogen data to support IPM best practices. The frequency of EU_6_A1 also declined to 16.3% and was only sampled in France, the UK and Ireland (Figure 1). However, the frequency of EU_1_A1 increased slightly from 0.4% to 1.2% of samples. Overall, the frequency of these three previously dominant lineages has fallen from almost 68% in 2014 to just over 30% in 2020. Over the same time, three clones that have driven the displacement, EU_37_A2, EU_36_A2 and EU_41_A2 have increased in frequency from less than 1% in 2014 to over 40% in 2020.

Clone EU_36_A2, first sampled at a low frequency in the starch potato areas in Germany and the Netherlands in 2014, comprised nearly 21% of the 2020 samples and is now reported from 18 European countries. Clone EU_41_A2, which was first recorded in Denmark in 2013 was sampled in Germany, Norway, Sweden and Finland in 2020 increasing to over 6% of the Europe-wide sample. Two clones were newly defined in 2020. A genotype that made up 22.8% of the 2020 Danish samples was defined as EU_43. This elevation to a named clone was based on it being also sampled at lower level (5-7%) in Danish samples from 2018 and 2019. All EU_43 samples are from FTA cards thus precluding phenotypic characterisation. A similar process was applied to a genotype reported in England and Wales for four consecutive seasons (albeit at a low frequency) that is now defined as EU_42_A2. 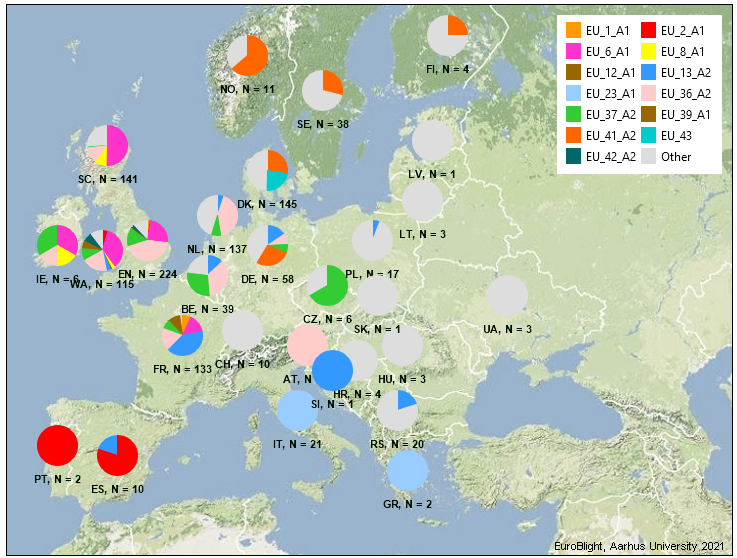 The overall frequency of clone EU_37_A2 declined for the second year running to comprise 7.4% of the 2020 blight samples, down from its peak of 14% of the populations sampled in 2017 and 2018. The reduced sensitivity of EU_37_A2 isolates to fluazinam reported by Wageningen University in 2017 confers a selective advantage to this clone when this product is applied, and probably explained its increasing prevalence in Europe over the 2016 to 2018 seasons. However, widespread reporting of the reduced sensitivity has led to a marked decline in fluazinam use across many countries and the removal of this positive selection pressure possibly explains the continued drop in EU_37_A2 frequency in 2020. This change in product use and the population response suggests management failures have been avoided by using more effective chemistry and indicates a strong positive benefit of the EuroBlight monitoring approach.  Regional differences, which may relate to variation in fluazinam usage, were apparent in 2019 with EU_37_A2 making up 25% of samples in France and Belgium compared to 4 and 10% in the Netherlands and England, respectively. In 2020 this dropped to 7.5% of samples from French crops but 28% of a relatively small sample (n=39) from Belgian crops.

The survival and spread of these newer clones, when others are decreasing or have failed to establish, suggests they are evolutionarily fit and supports anecdotal evidence that they are more challenging to manage in the field. Ongoing fungicide sensitivity testing with a range of key active ingredients in Wageningen University, The James Hutton Institute and, as part of the IPMBlight2.0 project, in Estonia and Norway does not, however, indicate any insensitivity issues with fungicide active ingredients other than fluazinam and phenylamides (discussed above). Further work in controlled field trials is required to identify the factors that drive population displacements.

Lastly, the genetically diverse ‘Other’ samples comprised 29.3% of the sampled population in 2020, a frequency that has remained stable since 2014. These diverse genotypes remain most prevalent in crops in the north and east of Europe and are consistent with a soil-borne source of oospores. Although there are epidemiological threats of earlier primary inoculum and theoretical evolutionary advantages to sexual recombination generating new pathogen phenotypes, we do not yet fully understand the practical threats posed by ‘Other’ strains of the pathogen compared to the clones.

The genetic diversity of the 2020 population has been visualised (Figure 2) using an analysis tool (poppr 2.0) linked to the EuroBlight pathogen database. The minimum spanning network shows sub-clonal diversity within each of the clonal lineages. The clonal and within-clone variation is being used to track the evolution and spread of these pathogen populations across Europe and beyond. ‘Other’ isolates (not shown) are genetically diverse and distributed across the whole network. 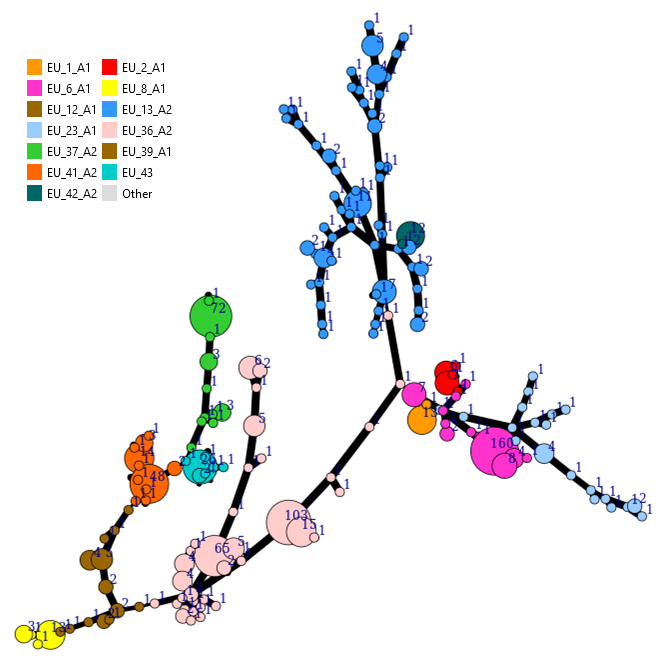 The EuroBlight model of pathogen tracking is a rapid, cost-effective and co-ordinated approach to understanding pathogen evolution on a European scale. Data on the dominant clones have been passed to growers, advisors, breeders and agrochemical companies to provide practical management advice and help shape longer-term strategies. The data provide an early warning of the incidence and spread of novel clones and the case of EU_37_A2 demonstrates such a timely response.

The EuroBlight network continues to harmonise methods with other networks in the Americas, Asia and Africa and encourages continued co-operation between groups involved in managing late blight to exploit the database and tools for improved awareness and blight management on a global scale. We will continue the monitoring in 2021, so please contact the project team if you would like more information or if you would like to contribute. We thank all the partners who have contributed samples and supported the project.