Researchers from Aarhus University have mapped water transport in soil macropores in Denmark. The mapping can, among other things, be used to identify risk areas in relation to phosphorus or pesticide leaching.

In the soil, there are pores of various sizes, the largest of which are called macropores. They can connect the upper part of the soil directly to tile drains or the upper groundwater. Previous research has shown that these macropores can have a decisive influence on water transport from the upper part of the soil and into the drains, and thus they can be an important route of transportation in relation to leaching of phosphorus and various pesticides.

“Phosphorus generally binds hard to the soil, which is why we assume that it is largely leached colloid-borne. That is, even though phosphorus binds hard to soil particles, it can still be leached because small soil particles (colloids) can be transported with the water through the macropores. It is especially seen in soils with a relatively high clay content,” says Associate Professor Bo Vangsø Iversen from the Department of Agroecology at Aarhus University.

In connection with the preparation of the report "Phosphorus mapping of arable land and water areas in Denmark" (in Danish), which was published by DCE - National Centre for Environment and Energy at the end of 2020, Bo Vangsø Iversen and colleagues from Aarhus University and the University of São Paulo have investigated and mapped water transport in macropores on Danish fields in order to be able to identify risk areas of leaching of phosphorus and pesticides.

"In relation to leaching of phosphorus, we believe that the link between the large macropores and the tile drains plays a major role, as phosphorus bound to the colloids can be transported freely with the water to the tile drains, and once they are in the drains, they can quickly be leached further out into streams,” says Bo Vangsø Iversen.

Colloids are small soil particles that are characterized by having a large surface area as well as a high adsorption capacity. They thus bind various nutrients, such as phosphorus and certain pesticides that previously have been considered immobile in the soil.

“It turns out that under certain conditions, colloids can be mobile as long as they can find a transport route. The ratio between the large and small pores of the soil varies. For certain soil types, there will be a high probability that water can be transported in soil macropores for instance in connection with heavy rainfall events. And this enhances the risk of colloids finding their way to the drains. And it is this route of transportation – the macropores, we have focused on in this study. We have tried to map where we expect the risk of colloid transport via macropores to be greatest,” says Bo Vangsø Iversen.

The researchers have thus quantified how water moves in the macropores in the Danish agricultural fields. One way to do this is to measure the soil's ability to conduct water; it is also called the hydraulic conductivity of the soil. Aarhus University has built up a database that contains measurements of the soil's hydraulic conductivity for a large number of points distributed throughout Denmark.

When the water content in the soil increases e.g. in case of heavy rain, larger and larger pores will contribute to water transport, and thus the soil's hydraulic conductivity also increases. In other words, the macropores only come into play when the smaller pores are water-saturated.

“We have tried to classify Denmark in relation to where we find the greatest risk of macropores coming into play. Of course, there are various factors that come into play, such as soil type and climatic variables,” says Bo Vangsø Iversen.

In order to map the risk of water transport in the macropores, the researchers first mapped how the soil's clay content varies in Denmark. Soils with a high clay content are considered to be the most structured.

“And when water is transported in structured soils, colloids are usually filtered very efficiently as long as the water is transported through the small pore system in the soil matrix, but water transport through macropores such as cracks, earthworms holes and old root canals reduces colloid retention, thus increasing the risk of soil particles being detached and transported down to drains or upper groundwater,” explains Bo Vangsø Iversen.

In order to be able to assess the risk of colloid-facilitated transport, it is crucial to know what the risk of macropore transport is in different soil types with different amounts of precipitation. And rainfall is not the same everywhere in Denmark, in some places it rains more than in other. Therefore, the researchers have developed a model that, by comparing mapped soil properties as well as the soil's hydraulic conductivity, can identify areas where there is a higher risk of colloidal transport through the macropores.

“We have thus been able to make a risk map of macropore transport in Denmark, and this connected with the knowledge of the different soil’s risk of colloid transport, it is possible to assess the risk of leaching of e.g. phosphorus through the macropore system,” says Bo Vangsø Iversen. 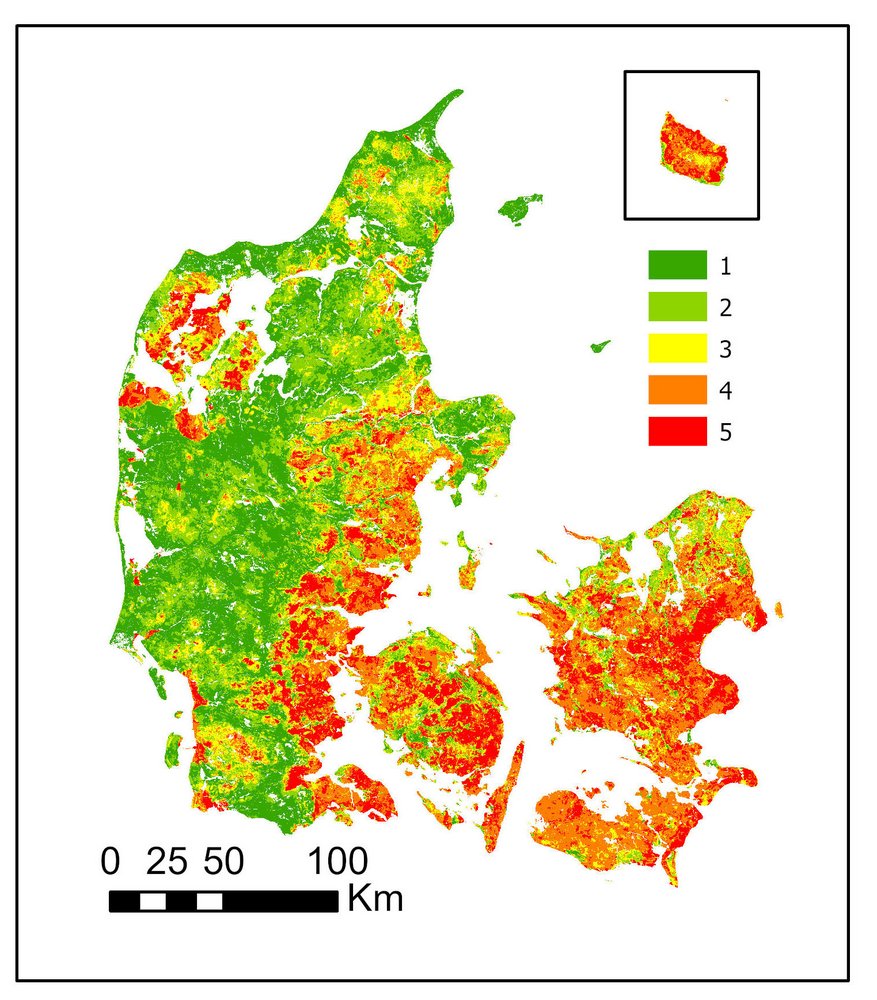 According to the maps, there is a big difference between western and eastern Denmark, which is partly due to geological deposits from the last ice age.

“In Eastern Jutland, Zealand and the islands, we have a more clayey soil. For these soils, the hydraulic conductivity in the soil matrix is ??very low and thus there is a great risk of transport in the many macropores of the soil. But we also see a red area in Thy and on Mors for example. It gives us a good overview, and it can give us an explanation for why you see leaching of phosphorus and certain types of pesticides from structured soils,” says Bo Vangsø Iversen.