How does ergot infect rye, and which genes play an important role in resisting the disease? These are questions researchers from Department of Agroecology have explored as part of an industrial post doc collaboration with Nordic Seed. The results will pave the way for better understanding of the complex mechanisms of ergot, which can be utilised in novel strategies for ergot management.

Rye is an important cereal crop, especially in northern Europe. This is mainly due to the high nutritional value as well as tolerance to the cool environmental conditions at northern latitudes. Rye can grow in cool temperatures and in marginal soil conditions, which may not be as suitable for wheat and barley. However, rye is threatened by ergot, a fungal disease which is known to cause severe problems, in particular in cross-pollinated rye.

”Ergot infects the spikes of the rye, where the fungus turns the grain into a mass as hard as stone. This in itself is not the biggest problem. The ergot is poisonous for us to eat, and it is especially bad for pregnant women. So, if the rye is infected, it cannot be sold,” says Post Doc Khalid Mahmood, who conducted this study as a part of his industrial post doc with Department of Agroecology and Nordic Seed as partners.

Ergot is as old as agriculture

Ergot in rye has caused problems for rye farmers throughout the history of agriculture. And it is known to cause severe problems by contamination of rye grains. It is a serious threat to bread production as the industry only accepts very limited amounts of infected grain.

“To avoid problems and loss of income for the farmers, it is important to find and produce hybrids of rye that are resistant to ergot infections, but in order to do so, we need to know the genetic basis for ergot infections,” explains Khalid Mahmood.

Ergot is known to infect young unfertilised ovaries in the crops; however, how the infection happens is not clear, and until now no resistance genes were known. 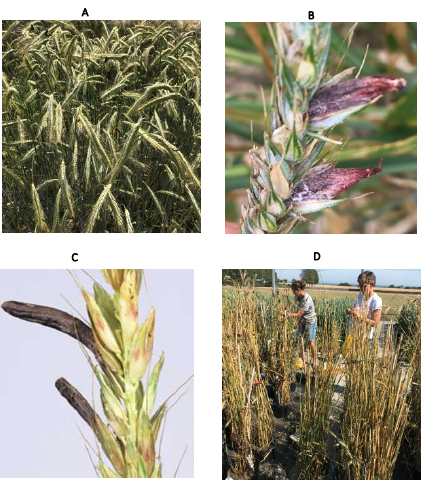 “The infection pattern of ergot is complex and the molecular response of underlying mechanisms of this disease was largely unknown, which is why we wanted to profile the gene expression after infection by using next generation sequencing for RNA, as it can provide details about the transcriptional landscape of the rye,” says Khalid Mahmood.

The researchers employed a transcriptomic approach to identify genes in the underlying mechanisms of ergot infections in rye. Transcriptomics is the study of the transcriptome, which is the complete set of RNA transcripts that are produced by  genes under specific circumstances in this case the ergot infection. In other words, the researcher investigated what happens within the genes of the rye, when it gets infected with ergot.

“We used a transcriptomic method, which basically gave us a snapshot of all the genes, and how they are active under a certain situation, e.g., when the ergot infects the spikes. It allowed us to see which genes gets activated to prevent the infection. And the snapshot of the genes makes it possible for us to identify a signalling pathway that is crucial in order to develop more resistance,” says Khalid Mahmood.

By looking at the snapshots of the activated genes in twelve samples of two rye hybrids with contrasting phenotypic responses to ergot infection, the researchers were able to identify the ergot mechanism, as well as identify the signalling pathway that is a part of the disease infection process.

“And this paved the way for us to identify a number of  candidate genes that play a role in developing resistance to ergot,” says Khalid Mahmood.

The gene expression comparisons showed that 228 genes were linked to ergot infection in both  resistant and susceptible hybrids . Some of the genes were associated with metabolic processes, cell wall modification, and pollen development to name a few.

“Our transcriptomic exploration shows how ergot influence transcript expression in both hybrids, and this will help us in the future to better understand the precise nature and origin of ergot infection in rye. So, this is the first step towards the development of gene-based strategies,” Khalid Mahmood explains.

The identification of pathways and candidate genes is an important step towards a better understanding of the complex mechanism that can be utilised in order to create new strategies for ergot management in the future. In crux, sequence data and de novo assemblies are valuable as scientific resources for future studies in rye.