The UK is talking about yellow rust as a major concern in 2021, where many other parts of Europe have very little – so what’s happening?

The news stories around Europe in 2021 are very different – The UK is talking about yellow rust as a major concern in 2021, where many other parts of Europe have very little – so what’s happening? 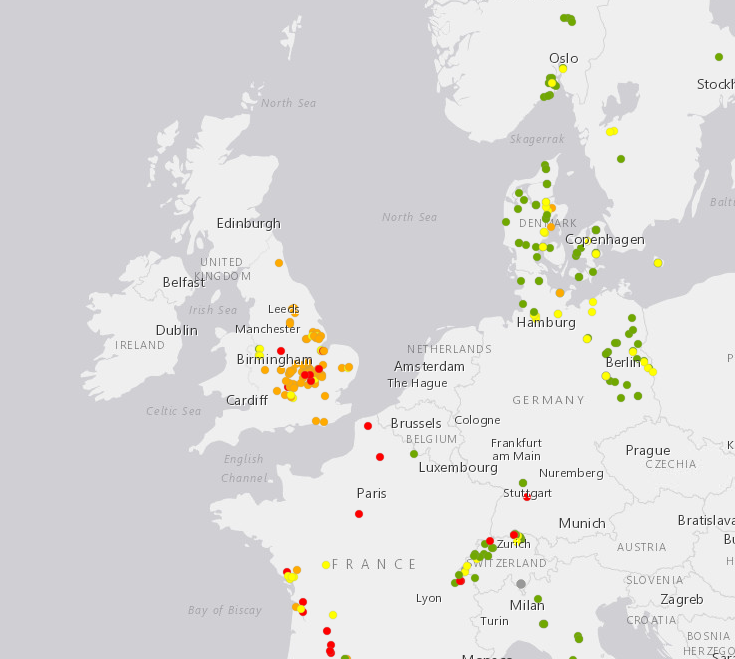 Yellow rust in the UK is widespread and yet regionally very variable, with the same varieties being badly affected in one region but not in another.  This has been a developing situation in the UK since the incursion of the ‘Warrior’ races in 2011.  Since then, there has been a battle between the different races for dominance – driven largely by the varieties being grown.  In the UK, the market is still dominated by varieties that are only moderately resistant to the two main diseases – yellow rust and Septoria tritici.  Historically, high-yielding varieties in the UK tended to be susceptible to S. tritici but the availability of highly effective fungicides meant that such varieties could be grown successfully.  In recent years yellow rust has become an issue for many UK wheat varieties.

Figure 2 shows the main wheat varieties currently grown in the UK.  Those with an asterisk are susceptible to yellow rust. The 2 main quality wheats (breadmaking) grown are Skyfall and KWS Zyatt which together occupy c. 17% of the wheat area. These 2 varieties are very susceptible to yellow rust – but continue to be grown because of end-user demand and lack of alternative, more resistant, varieties. There has been an increase in the number of disease-resistant varieties such as KWS Extase, Theodore and Graham but they tend to be lower-yielding or have other unfavourable characteristics. Consequently, the UK still has a large area of wheat requiring substantial fungicide inputs to achieve the yield potential of the varieties grown. In the search for high yields, winter wheat is often sown early which, coupled with mild winters, results in high disease pressure. Yellow rust is often found in the winter months and may require treatment very early in the spring. There is much less government pressure in the UK to reduce pesticide use and there are still many low-cost fungicides available to growers. 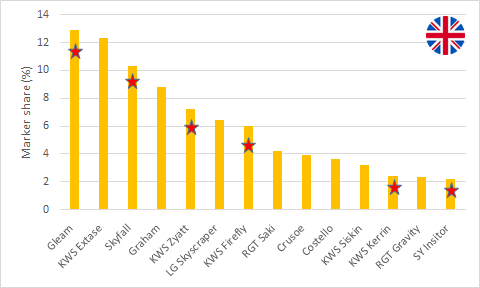 In Denmark, fewer varieties susceptible to yellow rust are grown (Figure 3), the area being dominated by yellow rust-resistant varieties (Informer, KWS Extase and Blend). Only two of the main varieties (Heerup and Sheriff) could be regarded as susceptible. Currently less than 10% of the wheat area is occupied by varieties susceptible to yellow rust. This is undoubtedly part of the reason why yellow rust has been much less of a problem in Denmark in 2021 compared to the UK. However, weather patterns also have a major part to play. Temperatures in January-April are up to 5 degrees Celsius colder in Denmark. In 2021 a very cold spell in February with severe frosts stopped yellow rust development. In contrast, the UK had up to six days fewer frosts than normal in both January and February, allowing overwintering yellow rust to develop quickly in the spring. 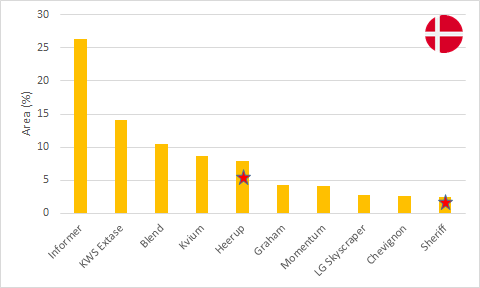 The UK Recommended List gives disease resistance ratings to aid decision making but the yellow rust ratings are relatively unreliable because of large regional differences in the races of yellow rust that are dominant. Consequently, the rust-reporting app developed in the RustWatch project has proven to be very valuable as it reports, in real time, yellow rust outbreaks in the UK and across Europe. Users can see which varieties are being affected by yellow rust in their area (irrespective of their resistance ratings) and respond accordingly. This ‘early warning’ of outbreaks helps farmers and advisers by alerting them to outbreaks. It also helps plant breeders as it gives early warning of outbreaks of rust on unusual varieties – allowing them to target collection of samples for genotyping and race determination.