Agroecological practices could reduce the dependence on external inputs in smallholder farms, benefitting their financial conditions and food security, which directly links to Sustainable Development Goals 1, 2 and 3.

Smallholders are small-scale farmers who own and/or manage areas varying from less than one hectare to ten hectares. Despite the small size of the farms, smallholder farming is very important for the local community, for example in Asia and sub-Saharan Africa, where smallholders produce approximately 80 % of the total food supply. Within the agricultural sector, smallholder farming has been central to agricultural development and plays an essential role in promoting a socially and ecologically just food system. Smallholder farming systems are extremely diverse, depending on the geographical region, national governance system and management type. Due to this diversity, any definition of the small-scale or smallholder farms and family farming will be context specific and regionally adapted. While it should be taken into account that farm size can differ for many different regions (biogeographic, socioeconomic and cultural), scales of the farm size are often used to classify producers (figure 1). 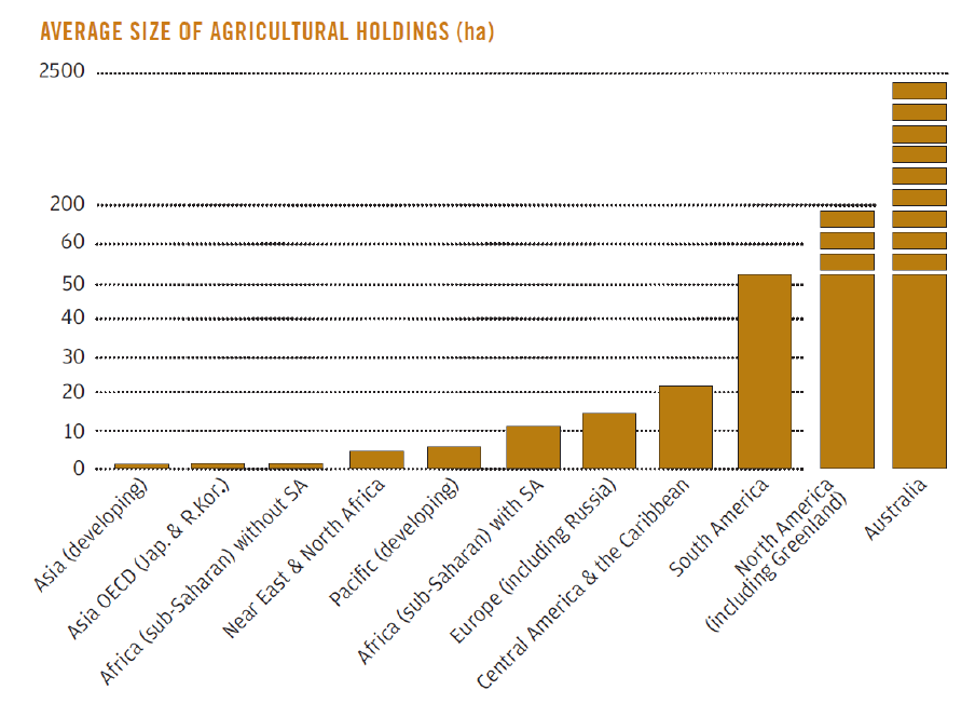 However, smallholder agricultural productivity has been facing serious challenges; Climate variability, lack of proper agricultural infrastructure, suboptimal farming practices, soil degradation and poor economic conditions are only the global constraints. Region/country dependent limitations and challenges vary and require specific consideration. For example, Southeast Asian countries deal with a set of common challenges preventing them from improved productivity and secure food, such as lack of access to land, land tenure and the threat of land-grabbing, limited or no social protections, poor access to markets and a significant gender gap.

Since smallholder farmers produce the majority of the food consumed in developing countries, ensuring the sustainability and productivity of their farms is crucial for food security. Food security is a flexible term that has had many different definitions over time, however the FAO came with a new definition in 2001 that has been widely accepted:

“Food security is a situation that exists when all people, at all times, have physical, social and economic access to sufficient, safe and nutritious food that meets their dietary needs and food preferences for an active and healthy life”. The concept of agroecology is closely linked to these three points:

According to La Via Campesina movement, “food sovereignty is the peoples’, Countries’ or State Unions’ RIGHT to define their agricultural and food policy”. This means that the priority of food systems should be feeding the people, guaranteeing access to land and resources for peasants. In addition, what to produce and consume should be free from external influences, which too often drive market prices and prioritise import/export rather than food security. Safeguarding food sovereignty goes hand in hand with the ability of smallholder farmers to sustain their production, which can be challenging in several ways. This is where agroecology can play a central role in increasing the ability of smallholders to withstand pests, diseases and climate disruptions, by promoting diverse and efficient systems that are knowledge-intensive (traditional and scientific), rather than input-intensive. In addition, a circular and fair economy that prioritises local markets would promote fair prices for both consumers and producers, who would gain an economic benefit from improved yield and lower dependence on external inputs.

Reducing the dependence on external inputs, the benefits of agroecological practices cover multiple aspects such as financial conditions, land tenure and food security of smallholder farming (linking to the SGDs: no poverty, zero hunger, good health and wellbeing). Adopting agroecological practices can therefore also strengthen the community and social dynamics amongst smallholders, by enabling them to make informed decisions and create sovereign food systems. The crucial point is that the process should be participatory and based on an increased availability of information and tools.

Citation for the ASEAN example: