New data on CYP51 mutations related to fungicide resistance in Europe is now available. The continuing development in fungicide resistance emphasises the need to implement IPM strategies including anti-resistance principles such as the use of appropriate doses, alteration between different modes of action and mixtures, and reducing the total number of treatments per season to a minimum.

Septoria tritici blotch (STB) of wheat caused by the ascomycete fungus Zymoseptoria tritici is one of the most yield reducing pathogen in wheat production in Europe (ref).

In conventional wheat production four main groups of fungicides are used for control of the disease:

Over the last years, several cases of gradual decline in field performance of these fungicides have been reported in Europe (Blake et al., 2017). A continuing decline in field performance of azoles have been reported and Septoria isolates with reduced sensitivity to SDHIs are now believed to be widespread in the UK and Ireland. Even the efficacy of the azoles to control Septoria has decreased to 40-60%, the azoles are still important mixing partners with the SDHI minimising the risk of resistance development to this group of fungicides. The Azoles also have good efficacy to control other wheat leaf diseases e.g. yellow rust caused by Puccinia striiformis (Jørgensen et al., 2018).

Currently the SDHIs are the only fungicides left that efficiently control Septoria, but based on the mode of action, the risk of pathogen resistance development is high. Therefore, there is an urgent need  to implement anti-resistance principles such as the use of appropriate doses, alteration between different modes of action and mixtures, and reducing the total number of treatments per season to a minimum (Heick et al., 2017).

The principles of Integrated Pest Management (IPM) and the continously monitoring of pathogen resistance to specific groups of fungicides is a part of several projects and initiatives e.g. EuroWheat, EURO-RES and Norbarag.

During the period 2015-16 in total 40 trials were carried out in the EuroWheat project. Attack of Zymoseptoria tritici varied considerably across Europe but the following conclusions were made from these experiments:

In the frame of EuroWheat, in 2017 11 EU trials for control of Septoria were carried out. A new azole (Revysol) showed significant better control than the old azoles. As shown in Fig 1. 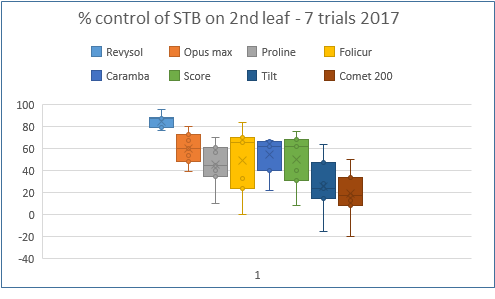 Figure 1. Test of eight different fungicides from the group of Azoles across six countries in 2017 (EuroWheat project, unpublished)

The distrubution and evolution of fungicide resistance is monitored across years and countries in several international initiatives. Maps and charts are available on EuroWheat about the evolution of mutations resulting in reduced sensitivity of azols. From these results it is clear that fungicide resistance related to control of Septoria is an increasing problem in parts of Europe. See the interactive mapping tool with updated data for 2017 here

SDHIs remained highly active against septoria in most parts of Europe. However low levels of SDHI resistance in Z. tritici strains carrying Sdh mutations C?T79 N and C?W80S were reported since 2012, followed by C?N86S (2013), B?N225 T (2014) and B?T268I (2015). High levels of resistance due to strains carrying Sdh mutation C?H152R were recently reported in Ireland and the UK.

A relative high level of cross resistance have been identified for SDHI fungicides, but the correlation varies between specific SDHI’s and mutations . Positive cross?resistance relationships between boscalid, penthiopyrad and isopyrazam, and a lack of cross?resistance between fluopyram and other SDHIs have been reported for some SDHI?resistant lab mutants and field strains of several fungi (Yamashita & Fraaije 2918).